Virtual Instruments and Effects for Windows 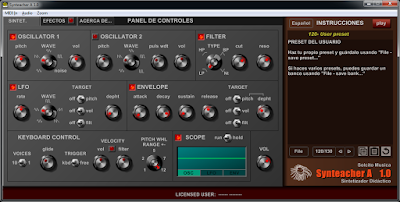 Synteacher A is a virtual synthesizer Stand Alone software for teaching and self-learning. It provides basic concepts to learn how to make sounds with all kinds of synthesizers, virtual or hardware, and some particularities of analog synthesizers.

It can be used by professors for classroom or also by anyone who wants to learn by him/herself. It offers presets with correlative instructions accompanied by a changing control panel, which increases its complexity as the user advances in learning. The synthesizer shows or hides knobs, buttons and switches according to the topic of each instruction.

This version has the options of English and Spanish languages.

SuperTron is available in 2 panel sizes, to choose the one that best looks onscreen:

Arido is an additive synthesizer with a simple FM feature and a subtractive filter.
It includes a polyphonic driver to generate variety of timbres. That is, a distorter that works on each note separately.
This synth allows make sounds like ambient, bass, pads, organs, distorted, nature, emulations, etc.
It brings on-panel help, MIDI Learn and pedal switch functions.

listen Arido demo soundtrack by Kujashi
Kujashi is a great german composer and performer. He made his own soundbank for this composition. All sounds and effects were made from Arido, except drums.


(it has instructions to get the VSTi)

or donate via email

Crio is a virtual monophonic analog/FM/Ring Modulation synthesizer to make arpeggios, bass, solos, leads, FX-style sounds, to be used at studio or live. Minimal controls, maximum functionality. It brings facilities to drastically modify the sounds on the fly, while playing. The LFO has special functions for rhythmic uses, such as quantization of waveforms synchronized with tempo. The user must use the Modulation Wheel to check the importance of the modifications that can be done at live. 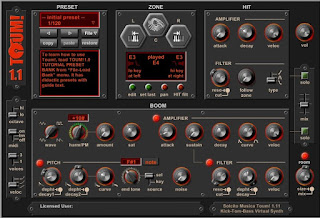 Toum! is a virtual synthesizer to design kick, tom, timbal, percussion and bass sounds. The user can use the include presets or make their own analog, acoustic and electronic drums, and EDM bass synth sounds. Also can be designed snares, clap, hats and certain FX sounds.
Toum! has a virtual analog structure and a small phase modulation component.

The user can load a tutorial preset bank with onscreen guidance text. It is included in the download package.

It is a VST plugin that modifies the sound to make it sound like on old equipments. It can be used over a mix or over an instrument to give it vintage warmth.